Lazada is a multinational technology company which is in Singapore. It is a Singaporean company that mainly focuses on e-commerce.

The founder of lazada company is Maximilian Bittner with the backing of rocket internet in 2012.

At present this company is owned by Alibaba group after its acquisition in 2016. In 2014, lazada company corporate sites in many countries and lazada company had raised approximately 647 million US dollars in several investment rounds from its investors like Tesco, Summit Partners, investment AB Kinnek, Rocket internet, Temasek Holdings, and JP Morgan Chase.

Lazada is a privately held business company. It is available in multiple languages like English, Indonesian, Thai and Vietnamese.

It was founded on 27 March 2012, 9 years ago. The headquarters of Lazada company is in Downtown Core and Singapore.

The Executive Chairman of Lazada company is Peng Lie.

The CEO (Chief Executive Officer) of this company is Chun Li and in Singapore, the CEO is Mary Zhou.

Lazada provides an E-Commerce service basically online shopping. Not only is the CEO of the company working hard for their company, but employees are also working hard.

There are a total of 10,000 plus employees in the Lazada company.

In March 2012 lazada company launched their company sites along with their business model of selling inventory for their consumer from its own warehouse.

In 2013 lazada company added a marketplace model, by which third-party retailers can sell their products through the lazada site; by the end of 2014, the marketplace accounted for 65% of its sales.

As of August 2018, Lazada is the largest online shop operator in Southeast Asia based on average monthly web visits.

In September 2019, lazada declared it was the top E-Commerce platform in the whole of Southeast Asia with more than 50 million active buyers annually. 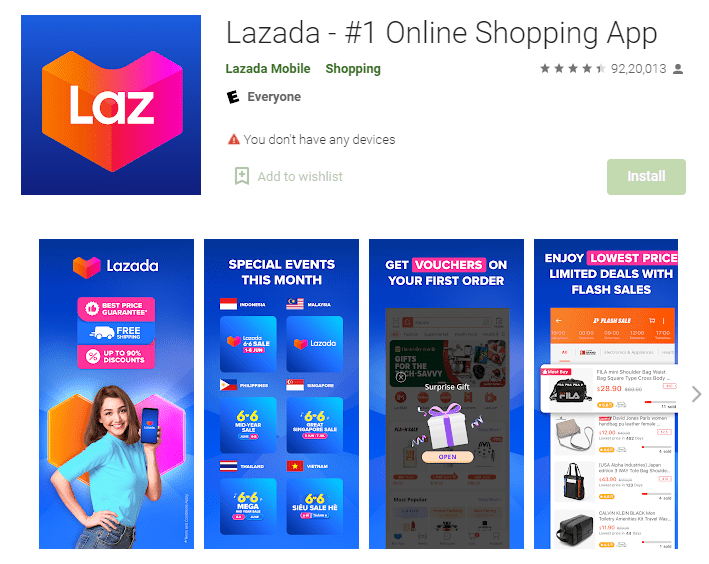 Lazada company was founded in 2012 by Maximilian Bittner with the help of rocket internet and also with the intention of establishing the amazon.com business model in Southeast Asia because they want to take advantage of the nascent online consumer market and at that time Amazon also had a weak presence there.

Rocket is a German incubator, it helps companies to build up and it also copies the business model of successful US tech companies.

Lizard also added a new service that within 2 days customers will get their order.

It is one of the biggest challenges for this lazada did a massive incalculable investment in warehouse and delivery service.

In June 2013, lazada company announced a big surprise, that is company raised an additional 100 million dollars and lazada company also launched a mobile application for Android and IOS both devices.

In the last month of 2013, the company raised an additional 250 million dollars from Tesco PLC, Access industries, and other exciting investors too.

In May 2014 Lazada launched in Singapore and right now Lazada Company Headquarters is also in Singapore.

In November 2014, Temasek Holdings Lado funding round off 250 million dollars in Singapore, which is a good thing for their company and bringing the total Lazada company raised to approximately 647 million dollars.

Also in November month, it declared that its marketplace platform accounted for more than 65 % of office overall sales and the number of third-party sellers also increased, in November there were only 500 but in December 2014 it was close to 10000.

In the last month of 2014, the number of employees across the region raised approximately 4000.

However the percentage of losses related to its Gross Merchandise Volume- the value of the products sold through the site – was smaller in 2014 than in 2013 because of growth in its gmv from 95 million in 2013 to 384 million dollars in 2014.

In the Southeast Asia region, many people consider this region as a market comprising new growth opportunities, and here the internet economy was packed by the growth of e-Commerce, and eCommerce is expected to raise 200 billion dollars by 2025.

In the southeast Asia region, there are so many people who are using the internet and they also accept online shopping too, which is a good sign for eCommerce companies.

By using the internet and mobile phone the company positions itself as two ladies in online shopping within the region.

In the southeast Asia region, 90% of lazada shoppers use cell phones to transact their purchases.

In this competitive market, there is a plus point for sellers, that you can easily do data analytics by using AI and you can also extract customers by using some techniques.

Acknowledging the importance of this concept, lazada focused on it and worked upon the business with the help of AI.

Answer– First you have to go to the Lazada website.

Then you have to choose to sign up as an individual or corporate seller, provide your mobile number, and slide to verify the number.

Q2-  What is standard delivery?

Answer– Standard shipping is a cost-effective option for delivery of a small to large standard package that doesn’t include overnight or any other special requirements to deliver products quickly.

Usually, standard shipping is done via couriers with orders possibly needing a day to process.

Standard shipping is a low-cost delivery option for small to large standard packages.

It doesn’t include overnight or any other special requirements to deliver products quickly.

Usually, standard shipping is done by couriers. It takes a day to deliver an order or maybe more than one.

Lazada is one of the best eCommerce business companies.

Lazada also has an app where you can sell or buy many products.

There is no cheating in the transaction, this is a fully secured app everyone can trust.