Picsart – Everything You Need To Know

Everybody likes to click photos or take pictures with family friends or relatives.

So everybody phones a good photo or a clear photo.

Not every person has a DSLR camera for taking high resolution or clear photos.

Everybody wants a clear photo for their social media but on the phone you can click a medium type photo.

So if you want a good photo for social media you have to edit it.

PicsArt is the best option for editing photos and everybody knows about PicsArt because most of the Instagram on Facebook photos are edited by PicsArt.

It is a very good option for editing photos. If someone uses it for daily life, it means editing photos of your friends’ relatives and more you will be an expert in it.

You can also earn money by editing photos of the public. Editing is also a good skill, everyone should try it.

Everyone can utilise it but nobody utilises it. You can utilise your time in editing photos on PicsArt.

PicsArt is a private company and it is a successful company. The headquarters of Picsart is in San Francisco, California, which is in the US (United State).

It is an internet type of industry. It was founded in 2011,that’s10 years ago. There are three founders of PicsArt named Hovhannes Avoyan,Artavazd Mehrabyan,Mikayel Vardanyan.

The picsart company provides you the service of editing photos and videos. 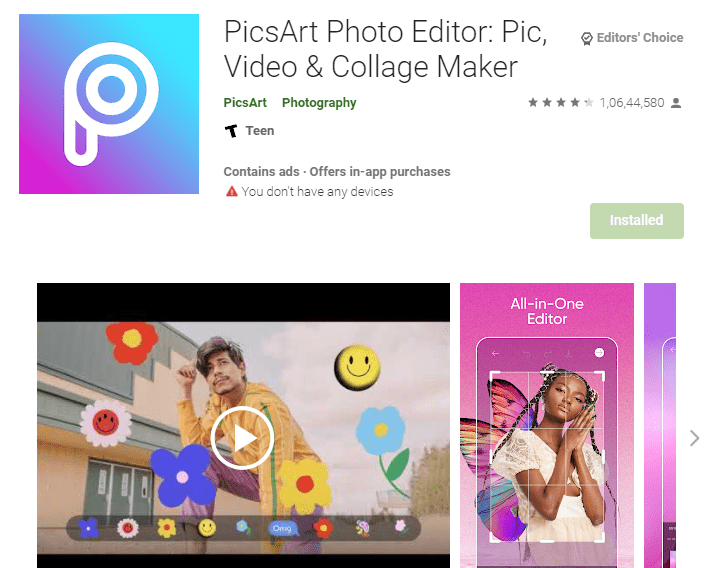 The founders are working hard for the company but employees are also working hard to grow their company more. In July 2020 there are total of 600 employees.

The picsart platform provides facility to take and edit pictures and videos you can draw with layers after editing the whole photo you can save it to your device or you can also share the photo two different social networks like Instagram, Facebook,WhatsApp.

In November 2011 picsart company was founded by an entrepreneur named Hovhannes Avoyan and the armenian programmers Artavazd Mehrabyan and Mikayel.

The starting picsart application helps their users to alter a photo image on their devices and more capability wha added or time.

The first picsart application was launched only on Android devices not in iOS.

After two years in January 2013 picsart released their iOS version too so iOS users can also use it in the phone. In the same year in may PicsArt release for the iPad.

At that time picsart also came in those companies who were rapidly growing. In late 2013 picsart application also supported on device windows 8.

In April 2015 picsart company reached 250 millions downloads on IOS or Android devices and also in a month there are 60 million users.

As you know, in that time picsart rapidly growing. So in 2016 PicsArt raised 75 million monthly active users.

In 2017, PicsArt is also one of the successful companies so they think more creative for jio users Dell launched I remix chat this is messaging system where II II users of PicsArt can share their beautiful images directly in groups and add them with friends.

They also launched a new feature for the users.

It’s a community creation, in this use of picsart can create a community and share custom stickers for free which is a good thing.

In 2017 in July month question supermodel and philanthropist Natalia Vodianova joined PicsArt to help them, she joined them for increasing social engagement and activism and that also worked.

After this big achievement they begin announcing partnerships with major consumer brands and celebrities.

Now the company was growing and the company was ranked by an app whose name is analytic company senses tower, this company analyses ranking of companies and the picsart company was on fourth top grossing social photo and editing app.

The official website of the PicsArt application is picsart.com.

Nullzerep – Everything You Need To Know

Q1- What is picsart used for?

Answer- in this platform you can edit your photos or videos and you can also click photos by picsart application.

If you take pictures through the picsart app camera your photo will be more clear or good you can also share your amazing photos to other social networks.

Q2- What are the premium features of PicsArt?

There is a major difference between picsart cold and PicsArt because in picsart gold you can use lots of exclusive items.

Pixel Launcher – Everything You Need To Know

Vegas Crime Simulator – Everything You Need To Know

Q3- What’s the cost of a picsart subscription for a month?

Picsart is a robust photo editing app, if you are using this app you know you never feel any bug or lag type something.

All thankful it’s you it is is well designed and easy to use.